The last dConstruct is a wrap! Jeremy did a great job curating a day that was (loosely) themed around “design transformation”. Here's my writeup of the day. 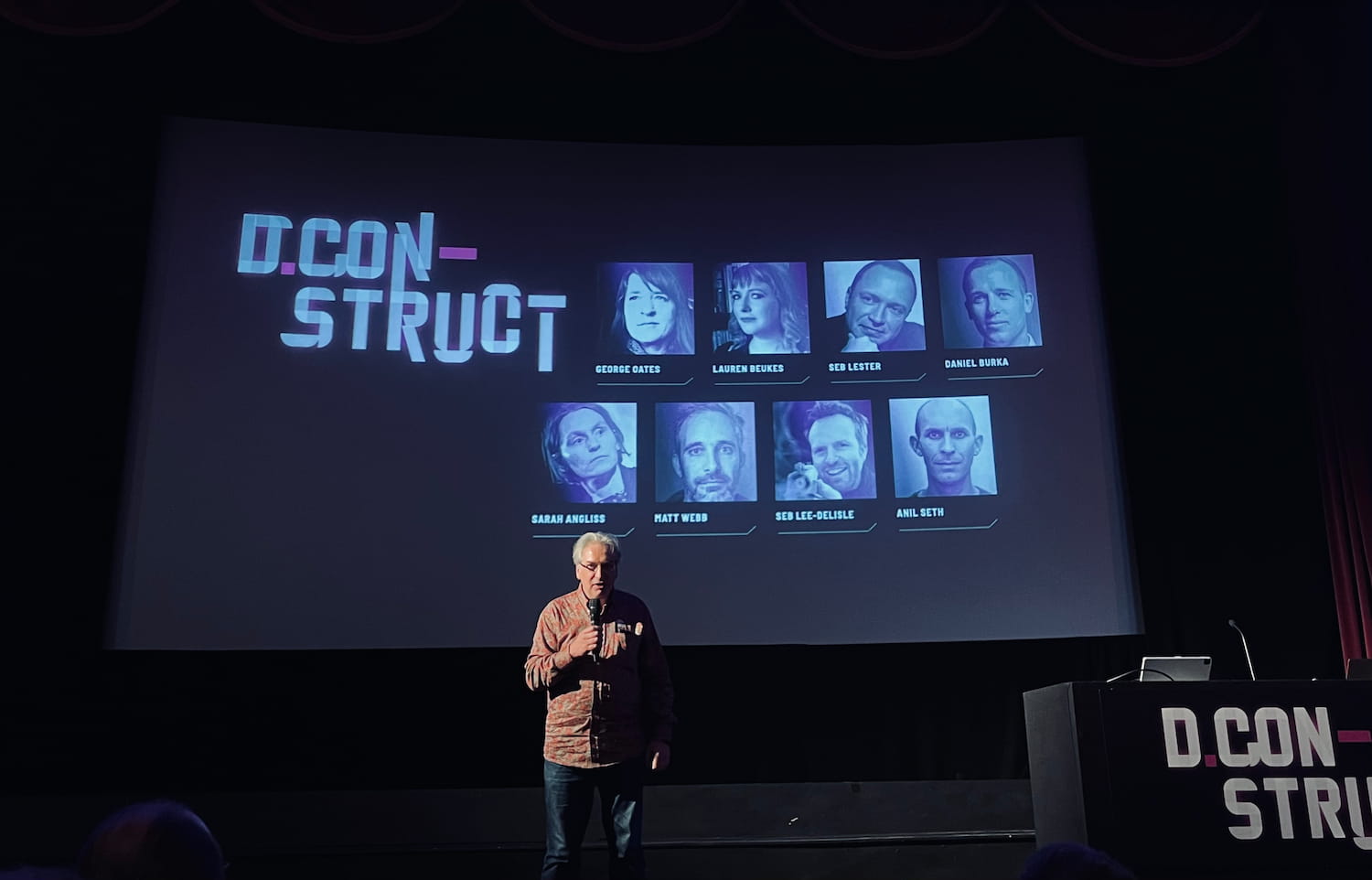 When designing Flickr, George Oates tried to design a “context for interaction, not just an application”. It worked. Flickr allowed people to post content and connect it through tags, comments and more. Today, the site has 50 billion pictures posted by millions of people, making it, in Jason Scott's words, “a world heritage site”. Archivists may have kilometres of underground storage where they keep historical records, a site like Flickr is unique, as so many people contributed to it. For future generations, the sheer amount of visual data could give away a lot about life today. But Flickr isn't a given. Changing owners a few times, the site was almost killed and all content deleted. Now, at Flickr Foundation, George thinks about keeping this content for the future. And by future, she means the next 100 years. Long term preservation most likely needs selection, George clarified, maybe by letting users mark specific photos of theirs as keepworthy. Maybe it needs printing after all, as we are not sure if JPGs or PDFs are still readable in a 100 years. And how do we preserve a picture that is part of a network, if we can only preserve part of that network? How does this wealth of content survive economic forces and corporate whimsey?

These questions made me worry about the content I create online: blog posts, tweets, videos… it's on my personal website that I'm most sure there won't be corporate whimsey, but it's also unlikely to survive when I'm not around to pay the hosting bills. Should I update my testament?

The fun part of writing is the research

Lauren Beukes is a best-selling author. She travels a lot and said she actually enjoys the all this research more than the actual writing. On these trips, Lauren talks to a lot of people, from detectives in Detroit to teenage theatre geeks. She learns from their perspectives, takes in their sometimes horrifying stories and learns how they are treated by the system. Part of what a novelist does, she explained, is asking “what if?”.

Type designer and calligrapher Seb Lester showed how a typeface he started designing on a train, came out 8 months later and started getting used. It was on washing powder, sky scrapers and olympic games branding. “When a typeface goes out in the world”, Seb explained, “a little bit of you goes out in the world”. The font was everywhere, but hardly anyone had heard of him (he said). Until he started publishing letter forms and calligraphy on social media. Seb's calligraphy videos and a cheeky comment in an interview in Salon got him jobs designing visuals for rocket scientists and Apple. His videos of lettering in progress are extremely soothing to watch, transforming from what seems like a few scribbles into beautiful works of art. Seb's stories were a reminder that success is very much a combination of two things: you want to “work hard”, “find your passion” and “believe in yourself” on the one hand, and be lucky and get noticed by the right people at the right time on the other. That last part is out of your hands, so you can only really try to do the first. 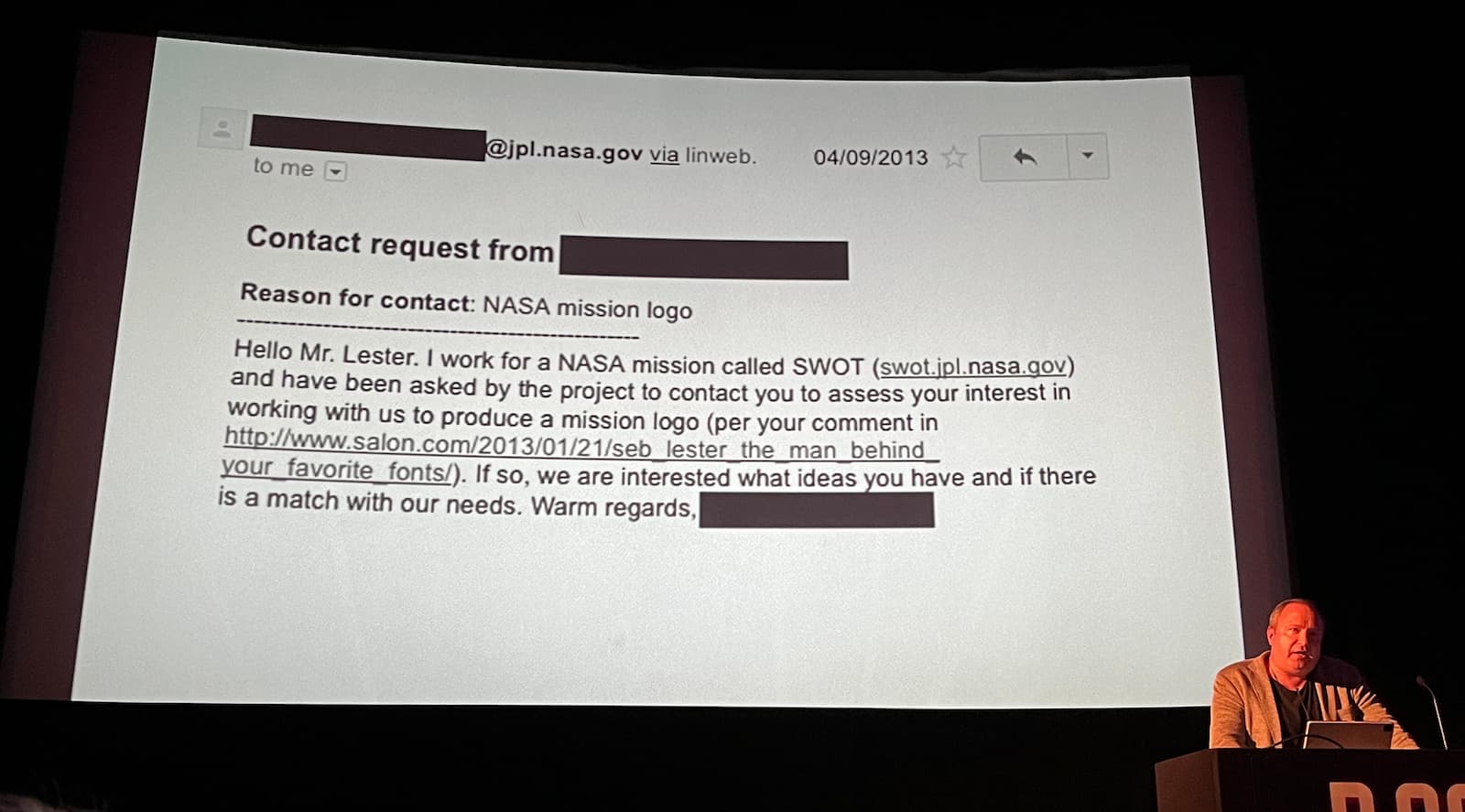 Design to make the world better

Daniel Burka has been a designer for a long time. He worked on the Firefox brand for Mozilla, which was interesting because of open source and their mission. He worked on Digg, which was interesting because of their scale. He worked on a game called Glitch, which was interesting because the creators of Flickr were involved, and Glitch became Slack). And then he worked at Google Ventures, where he met a number of companies working on life sciences related products. Then he came to realise that while designers in Silicon Valley are often in a very comfortable position, a lot of the world isn't well designed. This resonated with me: some of our largest's design budgets are used to solve trivial problems, like yet another food delivery service. Education, healthcare, financial services… they are long-term and hard problems. Highly regulated, too, and not very used to having designers on their teams. Daniel ended up working on Resolve to Save Lives, where he makes software that makes it easier to register data about high blood pressure patients. This sort of data saves lives by making it easier to get patients to return regularly. But clinicians want to spend time on patients, not data entry. The technological layer needs to be very light, to be effective.

In technology we trust. So much, that the Paris climate agreement—essential to humanity's survival on earth—is based on the assumption that technological inventions will be available. Techno-utopianism is not new, Sarah Angliss explained. She told us about Muriel Howorth, who was an amateur nuclear scientist who reckoned that if radiation could be used for atomic bombs, it could be used for atomic gardening. Howorth wanted to use “atom-blasted” seeds to grow a giant vegetable. Sarah also discussed an experiment in which fluoride, which is toxic in high quantities, was added to a city's water supply, with high expectations around improving the citizen's dental health, and “saxton spanglish”, a phonetic and somewhat controversial method of teaching children English. It reminded me of pinyin, that is sometimes used to teach non-native speakers Mandarin Chinese and also controversial for oversimplification and making proper learning harder. They are all attempts to transform through design, that are a little too utopian. Maybe another modern day equivalent, besides climate tech optimism, is that once so popular social network that frantically tries to make the ‘metaverse’ work, or even that we try and sprinkle machine learning on everything, even where it doesn't necessarily make sense (see AI for content creation). Yes, it could work, but it could not.

Computers need to get better at togetherness

Matt Webb talked about reinventing the workplace. One major reinvention was when the personal computer made its debut (see also: the setup). Here's some utopianism that did end up well. Screens, documents, text processing, the mouse: the mission to put a computer on every desk (and Douglas Engelbart's “mother of all demos”) completely reshaped what offices looked like. Speaking of design transformation! Matt noted how, fascinatingly, much of the history of computing is about furniture design. I didn't know Herman Miller worked with Doug Engelbart's team to invent furniture to go along with their machines. Is the office done? Not really, as in 2022 we increasingly find ourselves working together from different locations. The current state of “togetherness” is lacking, Matt explained. We can be in virtual rooms together, but it isn't as good as it could be. For instance, they don't have a window out—you can't see who's approaching the space. There is little of the serendipity you might find in a physical office. With Sparkle, Matt works on a Zoom replacement, a tool that aims to facilitate togetherness better. As a remote worker, and as someone who isn't sure Big Tech has the solution for us, I will be following this work. 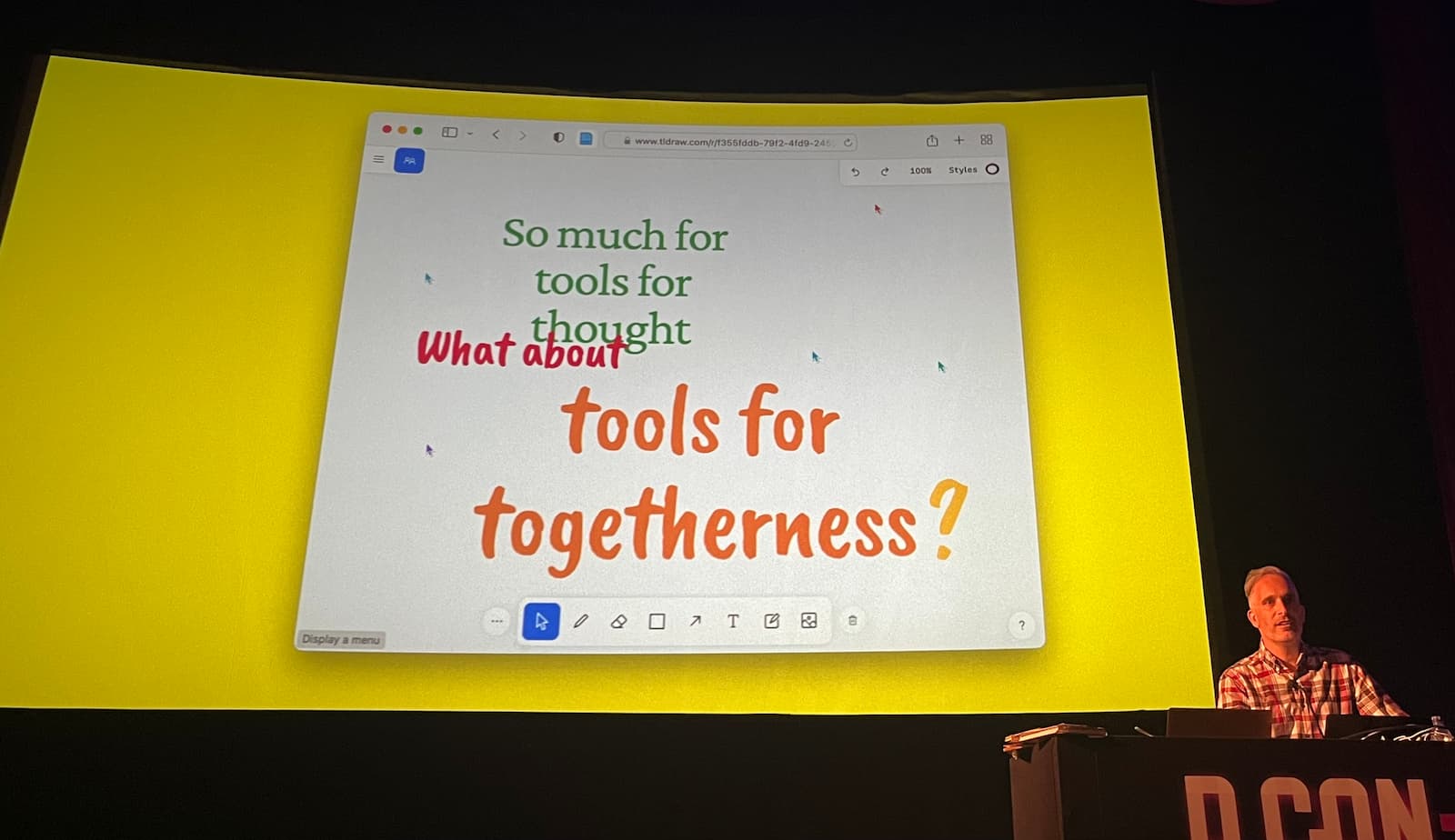 Lasers: they are fascinating. Seb Lee-Delisle showed us how he took animations outside of the projected screen to kick off Smashing Conference in Oxford, displayed love for the NHS onto their Brighton building during the pandemic and displayed laser fireworks that people could interact with. It's impressive, really, how much even one laser can do, let alone the over 30 in different strengths that he currently owns. Seb had the arcade game Moonlander (I had to look it up) projected on the wall with lasers, so that we could all try and safely land a moon lander by affecting the vehicle's thrust with our applause.

Anil Seth concluded the day with a talk about perception. Questions about how we perceive the world outside and our own bodies have puzzled philosohopers for millennia. Today, neuroscientists try to confirm through experiments that we don't perceive the world directly, showing some of these philosophers were correct. Sensory input, Anil explained, is constantly processed by our brain—it fills in the gaps based on what it remembers of the past and predicts of the future. Seb's lasers had just demonstrated that: when he made his laser move in a circle, we perceived a static circle, not that movement. Just like a film is really 60 different images per second… our brain causes us to perceive it as a film. Anil drew an interesting parallel between perception (“controlled hallucination”) and halluccination (“uncontrolled perception”). This constant interpretation of input by individual brains implies what Anil calls “perceptual diversity”, everyone perceives differently. In an art installation called Dream Machine, participants' perception is triggered and then recorded in the form of drawings afterwards.

There was a bit of design transformation in each of these talks. We were rightly warned about tech utopianism. Design and technology can't transform everything, yet some speakers shared their plans to transform. They (re)defined what it means to perceive ourselves, collaborate on screens or keep content available over a long stretch of time. Some speakers were right in the process of transforming. They talked about turning a series of penstrokes into art, lasers into fireworks, human experiences into novels and patient data collection into a minimal effort task.

A lot of our work in web design and technology has a power to transform and that is wonderful, especially when we manage to be intentional about the how and why. With that, I'll conclude this write up of the last dConstruct. If it piqued your curiosity, word goes that audio of the full event was recorded. It will be added to the dConstruct Archive in due time. For now, thanks Clearleft for another excellent event.

@seb_ly@mastodon.social wrote on 11 September 2022:
thanks for the write up! Ironically I think the version of lunar lander that you link to is stolen from my JS recreation haha : lunar.land

@seb_ly@mastodon.social wrote on 11 September 2022:
hey no worries, you weren't to know! I think my game is the top hit for "Lunar Lander" on google, at least for me on incognito mode.