This week I had the pleasure of attending the Progressive Web Apps Dev Summit, an event organised by Google in the beautiful city of Amsterdam. These are my takeaways from the event.

The screen was immense

Progressive Web Apps: what and why?

What an ‘app’ is, depends on who you ask. When we are talking about apps on mobile devices, they are usually things with specific capabilities. They help users do things, integrate well with device capabilities, can be opened from a home screen and are able to work full screen and offline. At the moment, apps with all those capabilities are usually not mobile websites, but app store apps.

From a technical perspective, there are only a couple of things that separate mobile websites from app store apps. But in terms of user experience, these differences are enough for people to prefer app store apps to web apps.

To solve this UX gap between native and web, Google came up with the concept of Progressive Web Apps. It’s a set of open web standards that lets developers turn their ‘website’ into a ’web app’, in a progressive manner.

What’s a progressive manner? If your site already functions as a website, by adding stuff to it, it can become more app-like. Browsers that don’t support this ‘stuff’ will get what they already got before. Supporting browsers, however, will get the benefits. As an extra. The idea is that over time, more browsers will fall in the supporting browsers bracket. It is a bit like using rounded corners in CSS, knowing that some browsers will take advantage of it, others will ignore it. Users will likely not notice they are missing out, but will get a better experience if they aren’t.

With progressive web apps, we can ‘earn our space on the home screen’ (Alex Russell), ‘stop blaming being offline on the user’ (Jake Archibald) and ‘give the user a page they can interact with faster‘ (Surma). Whereas native apps are things you go out, buy and download, PWAs are basically an up-sell: you download them by visiting the page, and keep them if you like to.

Google have been great hosts! They drove us to the venue with a shuttle bus, let us in for free, provided lots of fancy food and drinks throughout the two days and used exciting intro tunes between speakers, who presented on a huge wall-to-wall screen. They really are serious about saving the web in its fight against native apps.

It wasn’t just a Google party though. Google sent lots of their developer relations people, but so did others: there were people from all major browser vendors (except Apple) and they even did talks. There were also folks from businesses that built PWAs, such as the Nigerian online marketplace Konga and the Amsterdam-based Booking.com. This made the whole event much more like an open web standards event than a Google marketing event.

Progressive Web Apps is not one technology. It is one name for a set of technologies that you can use to progressively expose app-like qualities to go with your regular website. A marketing term, if you will. There were talks about most of the different technologies.

Making it better for users

Progressive Web Apps seem to be about making it better for the users, and many of the talks discussed how to do that.

The event did not just feature speakers from Google, other browser vendors were invited to the stage as well.

Examples in the wild

Throughout the two days, we saw some presentations by people who have actually released progressive web apps ‘in the wild’. It was inspiring to see how they made those apps work for their organisation. PWA tech gives developers tools to do stuff, but it will not make your decisions for you (that’s a good thing).

This whole post may sound like everything is peachy, but there are also concerns about Progressive Web Apps.

iOS support is a concern. Apple were invited to the event, but other than Microsoft, Opera, Mozilla and Samsung, they did not attend (because of other commitments, and they really want to attend future events). Their absence was noticeable: they are a large player and we all would have liked to know what they think about these new standards.

And what about the URL? They are an integral part of the web, as it is what people use to point to stuff and share things. However, for apps to get a ‘Add to homescreen’ prompt on Chrome and others, the ‘hide URL bar’ setting is compulsory. In apps that run full screen, URLs cannot be copied. Opera Mobile are experimenting with a gesture that lets you ‘pop out’ of an app, back to the browser, so that users can see, copy and hack URLs. Great idea, I think!

Another matter is the risk of heavy reliance on complex JavaScript. Admittedly, complex JavaScript is not compulsory for something to be a Progressive Web App, but it is what all of the apps demonstrated at the summit were using as their tool of choice. I’m not sure if this concern is a concern with PWAs, or with the let’s-do-it-all-with-JavaScript trend. Service Workers can be added to super simple websites like this blog, too (why not?).

The event was actually great at addressing many of these concerns, and culminated in a panel session moderated by Jeremy Keith (who published the brilliant Regressive Web Apps) . 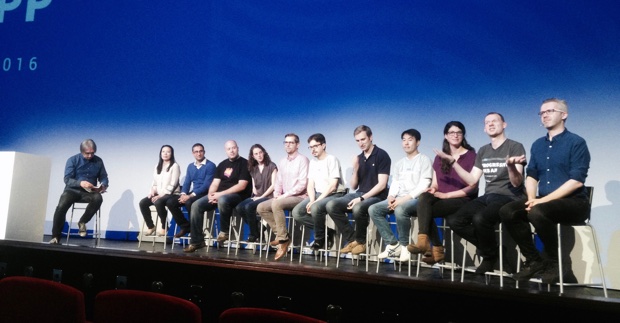 Two things are important about PWAs: firstly, they are a set of open web standards, which means all browsers can implement them in somewhat the same way and developers can be fairly sure things will work inter-operably. Secondly, browser vendors seem to be very excited about adding support for these standards, which increases their chance of being a safe bet.

It was exciting to hear about the technologies, and to see that a lot of them already work on a great deal of platforms. Most of the major browser vendors expressed how much they liked the idea, so it is realistic to say support will increase in the short term. This, and the fact that all PWA techniques can be regarded as a ‘progressive enhancement’ (with some leniency as to what that term means), entails that we can build Progressive Web Apps today.

Hopefully, we will do so responsibly. Native apps really only work on their particular platforms. PWAs, in theory, can be built to work universally. For everyone with a web enabled device. This is awesome! Major browser vendors are behind the idea, and I think as developers we should be, too.

To keep this post somewhat concise, I did not do each talk right here. If you’ve had to miss the event, it was recorded and videos are available on YouTube.