This weekend I attended my first Mozilla Festival in North Greenwich, London. It was great. In this post I’ll share some takeaways from my favourite sessions.

Ever since I started working for Mozilla, I learned more about their communities. They have wide interests, ranging from Rust to machine learning to WebVR. Sometimes related to Firefox, but often not. People from these and other communities come together at MozFest, to talk, learn and think about what Mozilla calls internet health. Internet Health is an umbrella term for various issues related to what’s happening to the web. They include (de)centralisation of power, online harassment, privacy, security and how people understand the web works (e.g. distinguish sponsored content from journalism). There’s also an Internet Health Report.

Mozilla Festival 2018 was 9 floors of internet health goodness, each with its own theme. The spaces had lots of meeting spaces that hosted small-scale workshops and talks. 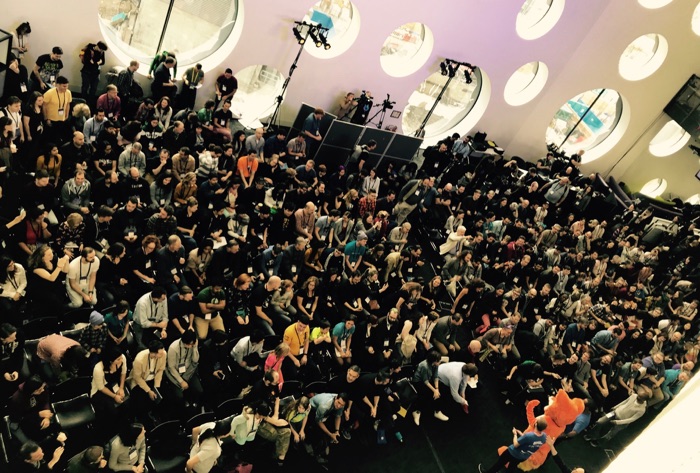 There was also a photo opportunity with a fox

“Targeted advertising is used as a delivery mechanism for propaganda”, said Nathalie Maréchal. She is a researcher at Ranking Digital Rights, a non-profit that tries to find out how much some of the world’s largest corporations respect their user’s privacy online. It did not take long for me, to realise how this is indeed a human rights issue. We can ask questions about enabling companies to know all about us in order to sell us products. It gets worse, though, when political parties use the same mechanisms in order to win elections. Or when the algorithms automate discrimination or create dangerous bubbles.

This session was about the problems trans people face when there is a mismatch between their official identity documents and what they self identify as. It was heartbreaking to hear some real-world experiences of trans people. After an introduction, we broke out in groups to define the problem space and then worked on finding solutions. We found we can do a lot if we avoid using a birth name as someone’s unique identifier in a system. In general, we should stop assuming names are fixed. This is easier said than done, because a lot of the systems banks an governments use are very old and not so flexible.

I also attended a session about a special sticker that fooled a machine learning algorithm, presented by Anant Jain. When fed a picture of a banana, the algorithm correctly classified it as such. When said special sticker was applied to the banana, the algorithm confidently classified it as… wait for it… a toaster. That’s a funny example, but the idea that machine learning systems can be fooled is not. There are lots of situations where this could lead to dangerous situations, like a self-driving car’s ML that fails to recognise a human crossing the street.

In the AI’s collateral damage panel (video), four very smart people shared their thoughts around potential consequences of artificial intelligence on our society. They talked about the danger of algorithms and our lack of understanding how they work. Guillaume Chaslot, who worked on YouTube’s machine learning algorithms, admitted he did not fully understand how they worked. And then there was the question of what to optimise algorithms for. If tech companies optimise for engagement, which they often do as it is good for ad-selling, this drives the content in a certain direction. Algorithms optimised for engagement are likely to recommend content that outrages people, fueling polarisation online. A third aspect the panelists discussed was legislation. Is it likely our governments are equipped to legislate AI, looking at how Mark Zuckerberg’s Senate hearing painfully exposed the senators’ tech illiteracy?

The content of MozFest was often pretty dark, but, surprisingly, people were pretty positive. They were looking for ways to bend the bad things into positive results. I had a great time and learned plenty of new things. I was even able to do a round of guerilla user testing a new product I am working on at the moment.

It was super cool to be among people that care about an open, inclusive and decentral web. Yup, I realise that makes me sound like my thoughts were re-programmed with Mozilla marketing speak. But being there, hearing about these issues and seeing people from all sorts of organisations care, it was brilliant. Would attend again!