This week I read Click here to kill everybody, a book that is at the same time worrying and encouraging. A security nightmare is waiting to happen, but there is still time to save the world. Yeah, the book is a tad dramatic, but generally a great read that I can recommend. 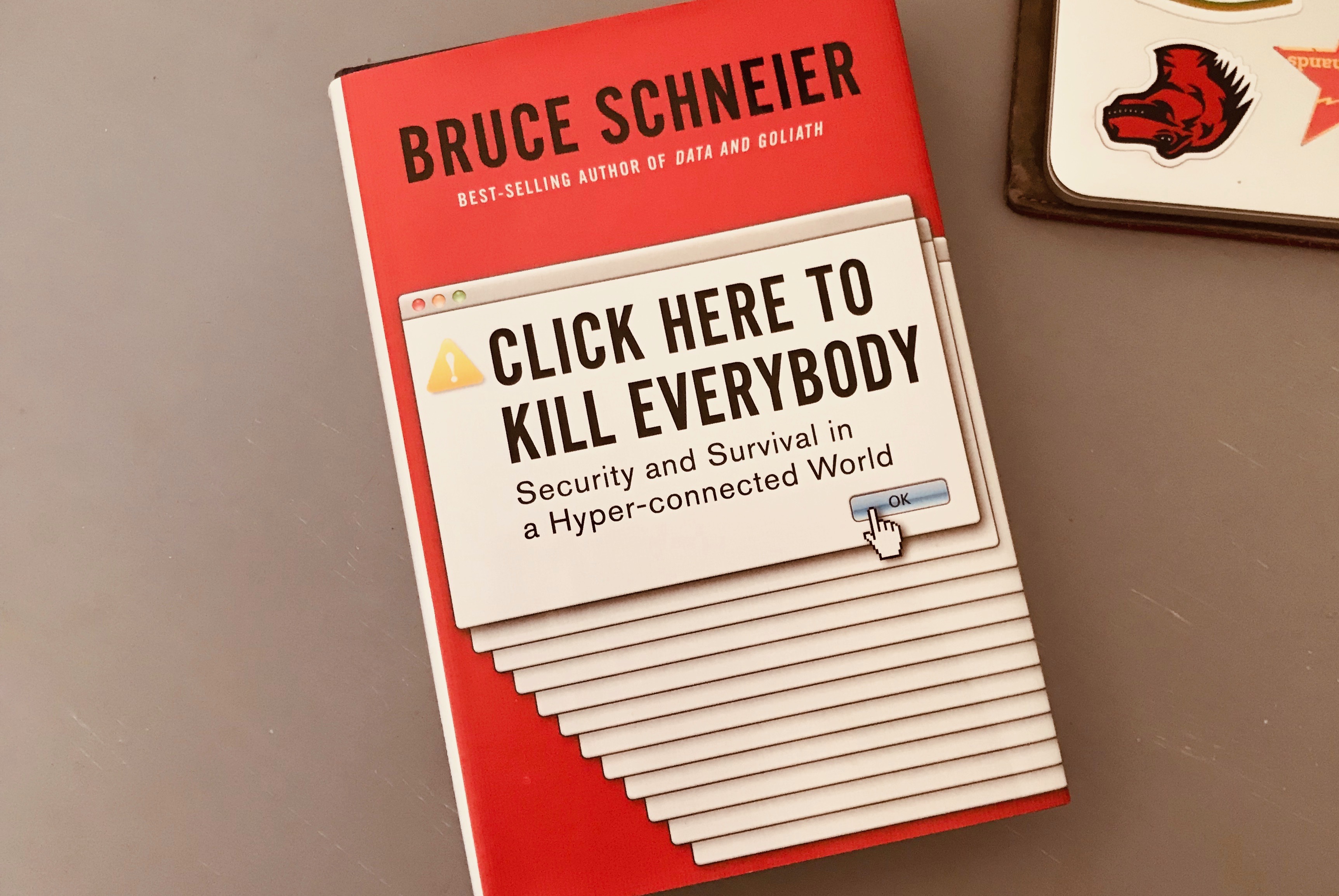 More and more devices are connected to the internet, and it is not just traditional devices with browsers, like desktop computers, laptops, tablets and smartphones. It’s also things like washing machines and fridges. Even in mission critical things like thermostats, pacemakers and nucleair power plants. We, humans, are in the middle of this new world: we give input to and accept output from our devices. In his book Click here to kill everybody, security expert Bruce Schneier coins the phrase Internet+ for this new reality (the internet, things and ourselves). He worries about Internet+, as it is grows rapidly and is a lot less secure than we should want it to be. With your car on the network, a hack could mean turning off its breaks while on the highway. With internet enabled medical devices in our body, a hack could mean turning you off. Yup, lots to worry!

The book gives a good overview of security risks that we can find in internet connected devices and how villains could exploit them. Many of those devices have problems that we technically already know how to fix. Encryption exists, but companies produce baby monitors that don’t encrypt voice data, to name just one example. Some of this sounds oddly familiar to accessibility: WCAG is over 20 years old now, but it is not implemented as widely as one would hope.

There’s lots of reason for pessimism, Schneier explains, if you think about the incentives of companies and governments. Companies focus on maximising profits, and lack of security is often no threat to those profits. This is because usually customers face the consequences. Surveillance capitalism also gets in the way, because you cannot trust companies to keep you secure if their business model is surveillance. In short, and the book goes into a lot more detail, we should not expect a lot from companies. Governments sometimes work against security: they try to keep security protocols weak and keep certain vulnerabilities secret, to make the work of intelligence agencies like NSA and FBI easier. Or they propose to ban encryption altogether (Cameron and May in the UK). Schneier questions whether such attempts are going to help: real criminals will find their way around, so it won’t stop them, but it will certainly make the world a lot less secure for ordinary consumers. Can we afford that?

Still, Schneier looks at the government for solutions. Because they could actually do something about companies’ lack of security, by legally forcing companies into making their products more secure. Earlier in the book, Schneier talks about how useful it would be if security and detailed aspects of it become metrics by which products get compared. I could imagine that to be policy, too: force companies who make Internet of Things devices to disclose whether or not they have certain security features. Does this particular baby monitor encrypt data, and with which algorithm? Oh, this other one does not encrypt at all. It fits well in Schneier’s call for transparancy: more transparancy about data breaches and security implementation is essential for a more secure future, he says.

One of the risks in governments getting policy about technology right, is that policy makers often lack technological understanding, Schneier explains. Last year’s Mark Zuckerberg hearings in the US Senate were probably a good example of that, although that was about privacy, not security. It was sad to watch many of the Senators ask the wrong questions, because they clearly did not get what they should have worried about. Many policy makers don’t seem to realise the risk of storing so much personal data on corporate servers, Schneier concludes. So he ends with a call to action. There is a huge need for people with an engineering background to be interested in policy, and get involved. Schneier also points at some experts who are already doing this, like Latanya Sweeney (“probably the best analyst in de-anonymysation”, now professor of government and technology) and professor Susan Landau who testified before US Congress about ubiquitous encryption.

I like the book. It is a bit sensational, has a click-baity title and focuses too much on the US and Europe, but it gives a really good overview of the stakes across companies, ethics and politics with regards to internet security. Its mostly about stakes, and not so much about practical security advice, which I’m sure you can find in one of Schneier’s other books. Click here to kill everybody ends positively: we can get this right, let’s take action now.

and Jelmer liked this