Last week I saw Sir Tim Berners-Lee, inventor of the web and receiver of the Turing Prize, give the ACM Turing Lecture. He spoke about redecentralising the web.

In less than an hour, Tim Berners-Lee talked us through the history of the web, its current state and what we need to do to have a healthy future for the web. Redecentralisation, he phrased this. The web was invented as a decentralised thing, but that model is currently under threat. Large portions of the web have become walled gardens from within which it is hard to exchange with others: data is kept within its own garden.

A universal and decentralised web

The decentralised web, Berners-Lee explained, started at CERN, a research institution that brings together lots of different people, from different universities, with different preferences for both natural and programming languages and, of course, lots of documentation that was stored on computers.

Berners-Lee worked at CERN as a software engineer and he had this idea for making documents easier to access by having unique identifiers for them. When talking about this idea at the coffee machine, a colleague said he should write it down. He did and when his boss read the proposal, he wrote the now so famous words ‘Vague, but exciting’ on the memo. When he later had some time in between projects, what an impactful coincidence, he started to develop this idea further. 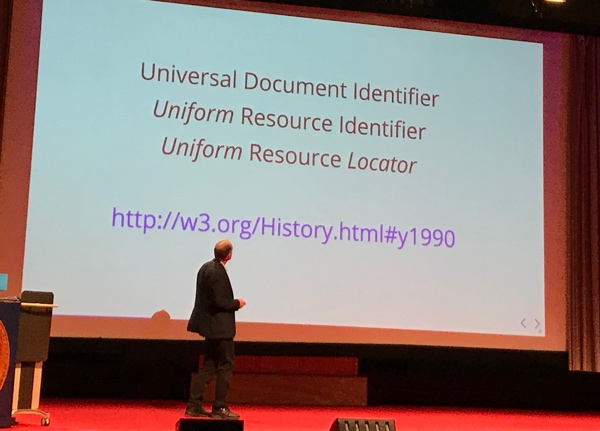 URI vs UDI vs URL

A key component of the initial idea was that everything on the planet should be named so that it has something to be accessed by universally — or uniformly, there was plenty of debate around the distinction, he explained.

The universality of the web, Berners-Lee said, is that it works independent of:

A web that has the above independencies is one worth fighting for, Berners-Lee explained. The W3C famously does great work in this, but less well known is that Berners-Lee found another organisation: the World Wide Web Foundation. It wants to make the web a better place for more people. He argued that if people spend 98% of their time on the web, they might as well spend 2% defending it.

Berners-Lee first showed a virtuous circle: if all goes well the web lets people publish, which inspires conversation and more publications. This is the utopian scenario and we’ve seen a lot of this actually happen. The web community itself it s a great example of this, we teach each other stuff and good blogs inspire other people to start blogging, this very blog is an example of that effect. 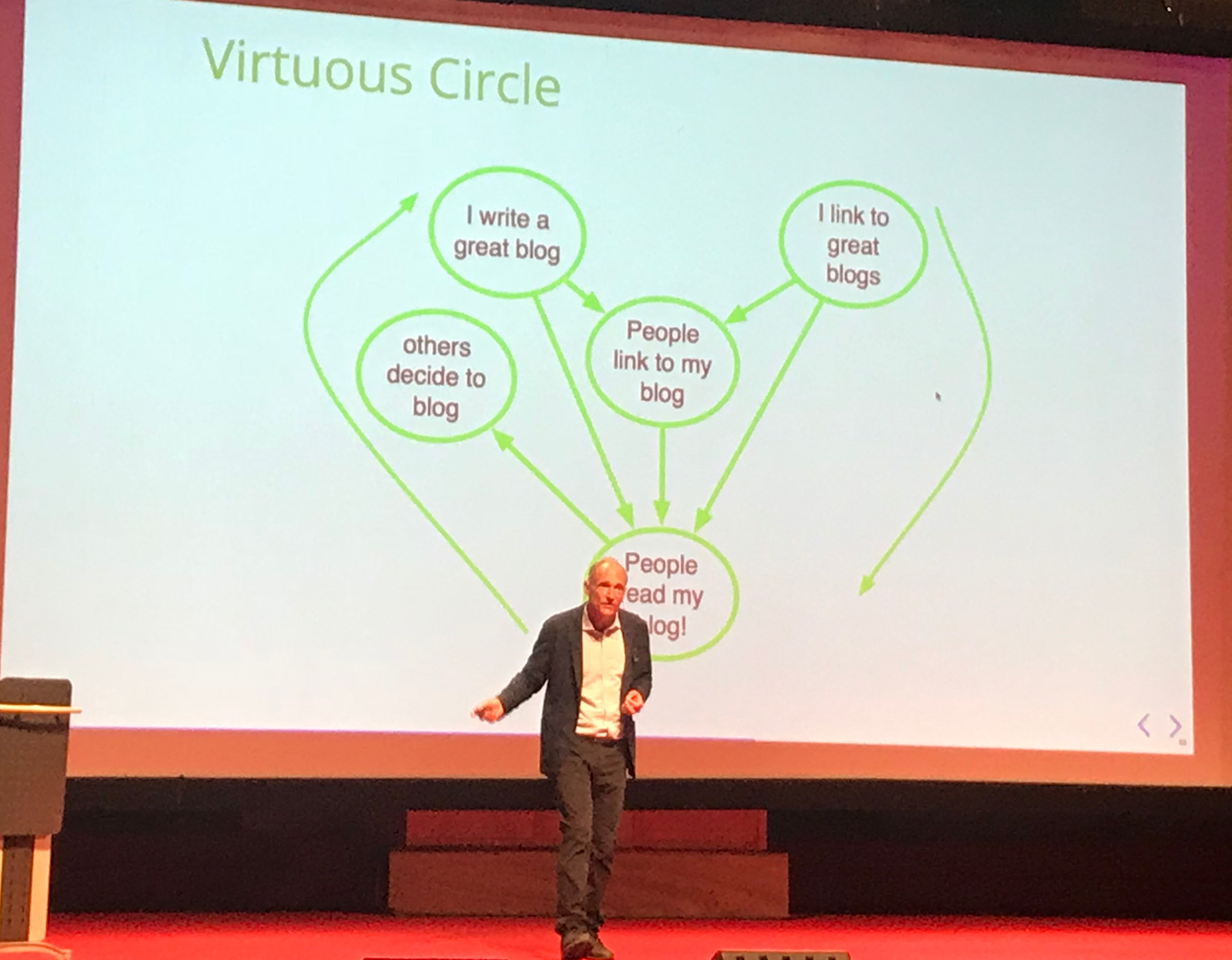 The ideal web is a virtuous circle

However, if we’re not careful, Berners-Lee warned, there can also be a vicious circle, a dystopian scenario. This happens when algorithms cause people to meet more people like themselves, narrows down their circle and alienates them from people who are different. Or when websites are used to harvest people’s personal data that are then used for political gain. Or when falsehoods are presented as facts. These seem pretty much like the things that Mozilla identify as issues concerning internet health.

There’s all sorts of things we can do to make better things for the web, and perhaps, consequently, make the web better. Berners-Lee urged us to build things that facilitate open dialogue and discussion, not flame wars. Human rights should be at the center of such things, and it would probably only work if it was not a centralised solution: we might need new (social) networks altogether in order to get what we need. Solid is an initiative led by Tim Berners-Lee aimed at building social websites that are not centralised and let people have control of your own profile and data.

It was an inspiring morning and great to see Berners-Lee speak in person (for what was my second time). The principles that the web was built on are strong and the lecture was a great reminder of how we can make better things on the web. We should make good things!