“It’s unfortunate that the world does not reward conciseness more. Making books shorter will effectively increase the rate at which we can learn.” This tweet from a start-up founder is quoted in Anna Wiener’s hilarious memoir Uncanny Valley, in which she tears apart the “dreary efficiency fetish” of the San Francisco tech scene, among other things. It touched me, because I love books and don’t want them disrupted. 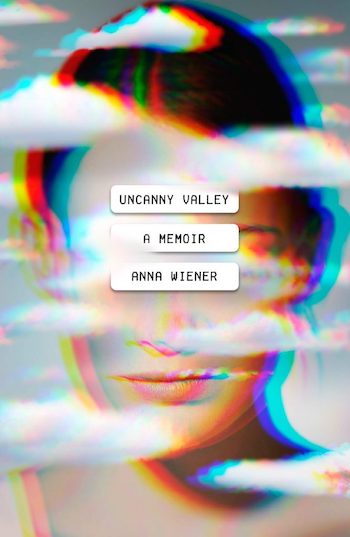 At 25, Wiener left her life in Brooklyn, New York for San Francisco, to go work in the Valley. This book is her “memoir”. She was astounded by what she found: the constant gospel of work as the most important part of life, men who are overly confident about their own ideas, open bars, the 24 hour hustle, the dress code of company branded hoodies, God Mode, camping trips with no actual camping, childish company names, companies ran by people in their 20s, an office reception that is a replica of the Oval Office… the book is full of these on point details. Most of these phenomena were not new or shocking to me (as someone who works in tech), but I enjoyed Wiener’s liberal arts perspective on them. Her somewhat ironic tone works really well for this kind of thing, as it nicely cuts through the nonsense. I chuckled a lot. It’s not a 300 page rant, though, Wiener does not simply attack everything the Valley stands for (there are other books for that), it’s more subtle.

It also isn’t just irony and fun. Wiener also takes the time to discuss serious problems in tech, including the feeling of “not belonging”, both as a women and as a non-engineer (she worked in support, and apparently that’s lower in the hierarchy). When, for work, she attended the Grace Hopper Celebration of Women in Computing, she describes she doesn’t feel like a women in computing, “more like a women around computers, a woman with a computer”. The “young founders” aspect, besides great to poke fun at, is also a serious problem, when tech companies hugely disrupt society. Their leaders may not have enough life experience to see the full picture, yet they feel they do, because venture capitalists put them on a pedestal.

Uncanny Valley doesn’t name names, it offers descriptions instead. A great style choice, because the descriptions say much more than the actual names would have. They add a little bit of context. The social network that everybody hated, the data analytics startup where everybody wears company-supplied “I am data driven” t-shirts, the venture capitalist who had said ‘software eats the world’, the open source code platform and the highly litigious Seatle-based conglomorate (that ends up buying that code platform). Uncanny Valley is not about the specific companies, but about the culture and the kinds of companies.

The book has a special place for Silicon Valley thought leaders and what Wiener calls the “founder realism genre”: the blog posts they publish. Men, mostly men, give each other ‘anecdote-based instruction and bullet point advice’. You know the kind of Medium post. Not all men, not all Medium posts, but you get the idea. Founders who are convinced everything needs the type of efficiency they specialise in, while shielded from the consequences of their own transformations. Founders indifferent to some of the big problems of our time: inequality strengthened by their business models, hate speech amplified by their platforms and mass surveillance enabled by their data, In an interview with Vox, Wiener says:

Silicon Valley is a culture focused on doing, not reflecting or thinking.

Reflecting is essential, and the Valley could do more of it. Wiener reflects also about herself, her life and her career choices. Wiener seems to like and understand the people she meets, truly tries to figure out what motivates them and isn’t just ranting about them. For her, it seems to be a love/hate relationship, with quite a bit of both. That makes this book so strong.

Recommended reading! If you want to learn more, see the interview with Anna Wiener at the Strand Book Store, listen to Anna Wiener at Recode/Decode or go to the book’s website.

Hidde de Vries (@hdv@front-end.social or @hdv on Twitter) is a web enthusiast, accessibility specialist and conference speaker. He works in Sanity.io's developer relations team from Rotterdam (Netherlands). Previously, he worked for W3C (WAI), Mozilla, the Dutch government and others as a freelancer.