In the age of surveillance capitalism, some browsers have started getting more aggressive in how they block ad trackers to protect the privacy of their users.

Firefox has had Tracking Protection since version 42. It works with a blacklist of domains. When something is blocked, it will show up in the Dev Tools Console (“The resource at X was blocked, because tracking protection is enabled”).

Safari not only can block trackers for you, it also allows third parties to define blocking behaviour. Third party blockers can match patterns in URLs and detect things like the domain a script is loaded on (same as site vs not same as site, the latter means third party). When a tracker is identified, developers can choose what to do: block it altogether, just block cookies or hide elements from the page. Users can install one or multiple content trackers. There is a “load without content blockers” feature (long press reload on iOS), but note users may be unaware of it. I know I was until very recently.

Four examples I encountered in the last few months: 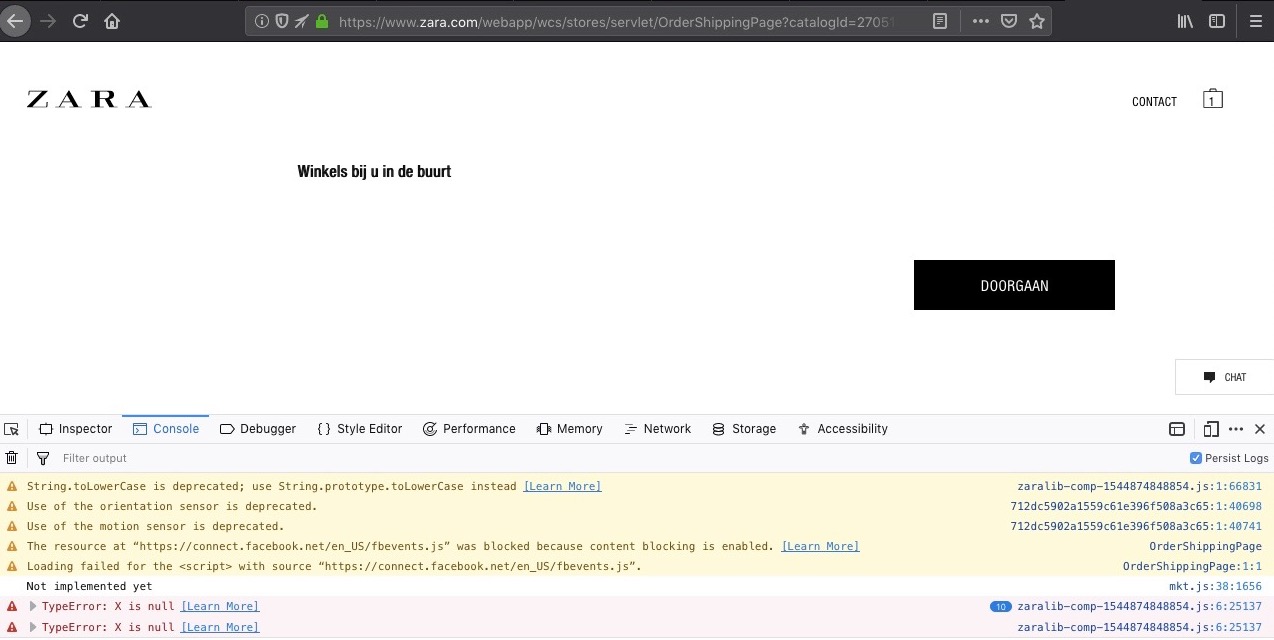 On this page, I could not select a store or press continue, because Facebook’s tracking script did not load

We should not need to track to take people’s money. Or to let them find opening times, open a hamburger menu or follow a link. Metrics can be useful, but they are rarely questioned.

I understand companies want behavioral data in order to improve their sites. But if it puts a stop to taking people’s actual money, doesn’t that defeat the purpose of why you have a website as a company? Is figuring out how many people open your hamburger menu more important than having the feature work at all?

This one is easy in theory. It is hard in the reality of modern web development, because people will laugh at the suggestion. If your site does not rely on JavaScript to build features like to take people’s money, search for opening times, show a navigation on mobile or go to other pages, these features can potentially just work.

If you manage to develop in a way that does not assume JavaScript (or CSS), you’re likely doing progressive enhancement of some sort. It means that when you build new features, you start with the very basic building blocks, like headings and lists. Simple HTML that describes the feature in a way the most basic browsers understand. You then turn it into something fancy, using web technology a modern as you like. For example, use Web Components to make it tabs, as Andy Bell described. If the fancy thing breaks, the basic building block likely still works.

Not only should progressive enhancement help make your site more robust and resilient, if your whole team can think this way, it can help setting priorities sensibly. See also Resilient Web Design, Jeremy Keith’s free book on building resilient web sites and Dear developer, a talk by Charlie Owen.

To build good websites, I think we should prioritise working websites above gathering potentially useful data (if doing that at all). As developers, we should keep in mind trackers could get blocked and, consequently, never rely on their availability.

Excellent.
Roger Johansson wrote on 7 January 2019:
“We should not need to track to take people’s money. Or to let them find opening times, open a hamburger menu or follow a link.”

On the importance of testing with content blockers: hiddedevries.nl/en/blog/2019-0…
Prateek Rungta wrote on 6 March 2019:
“I could not select a store or press continue, because Facebook’s tracking script did not load.”