This week I read (the print-version of) the Internet Health Report 2019, published by the Mozilla Foundation about issues that potentially stand in the way of a web that ‘puts people first’. With the phrase ‘putting people first’, the report means ensuring aspects like safety, openness, inclusion and control. Some of these things improved in the past years, some less so than one would have hoped. 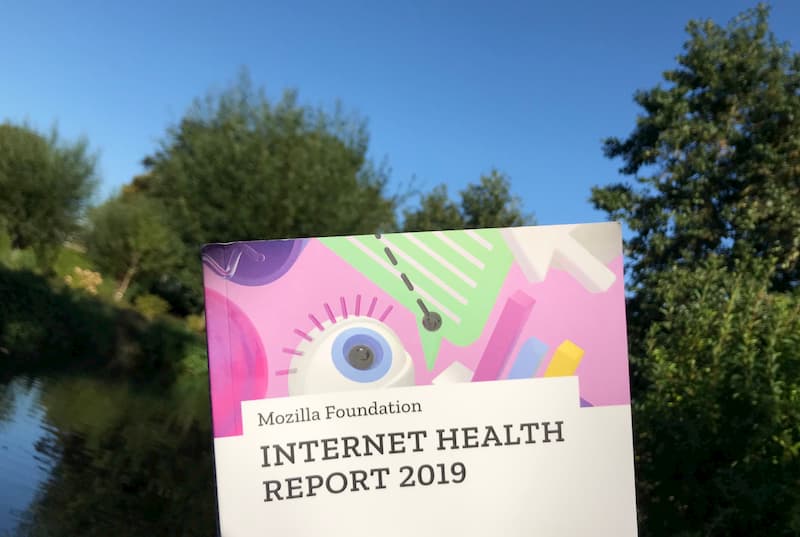 I read it by the waterside on my holiday

The Internet Health Report is edited by Solana Larsen for Mozilla Foundation and puts together input from hundreds of readers and experts in an extremely readable format. Or multiple formats, really, as there is the website, the ebook and (new this year) a printed edition. The print version definitely helped me read the full thing. Everyone is invited to participate:

this publication is neither a country-level index nor a doomsday clock. We invite you to join us in assessing what it means for the internet to be healthy, and to participate in setting an agenda for how we can work together to create an internet that truly puts people first

In his update, Mozilla Foundation’s Mark Surman calls out three things that improved: calls for privacy are becoming more mainstream, people start to speak up about and work on more responsible AI and a healthy discussion about big tech is taking place among more and more people. Some things also got worse, Surman writes: there is more internet censorship, biometrics are being abused and increased AI usage specifically affects minorities because of bias, despite efforts like ethics boards.

This post has some of the things that piqued my interest, with links. For the full content, including all sources and links, get the printed edition or visit the Mozilla Internet Health Report 2019 website, where you can read everything or just the things you’re interested in. There is also a PDF of the short version.

In the spotlight section, the Internet Health Report features three articles that all have something to do with data.

‘Use of AI is skyrocketing (for fun, as well as for governance, military and business) and not nearly enough attention is paid to the associated risks’, says the report. Governments start to use AI in military, for immigration decisions and for surveilling citizens, places one can imagine (racial) bias can cause serious harm. OpenAI decided not to release a trained data set as they worried about malicious uses of the technology. Some companies founded ethics boards to govern their AI usage, but they are often big companies with, inevitably, competing priorities. See also: Let’s ask more of AI

Data is useful for cities to base their policies on, and are somewhat envious of the ‘data monopoly’ big tech companies like Uber and AirBnB have. Some only give permission to do business on the condition of getting access to businesses’ data. See also: The power of cities

Paying for products with your personal data threatens freedom and human rights, because the algorithms that let companies do targeted advertising, can also be exploited by people with bad intentions. Some change is happening: Facebook, Twitter and Google all took some action against abuse after public pressure and new legislations. Lots of browsers now protect against tracking and/or block ads. Companies also start to realise targeting and knowing everything about everyone doesn’t necessarily make them more effective. See also: Rethinking digital ads

More and more awareness around privacy on the web is raised; by the campaigns of non profits like the EFF and Mozilla, but also by numerous data leaks that got into mainstream news and GDPR, the European data protection legislation that affects pretty much all businesses that are online. Tracking protection has become something browsers compete on (Firefox and Safari are ahead in this game), and even Facebook’s CEO announced that they now care about privacy.

The web has always been fundamentally open. Imagine starting a new website required a government issued permit, or that getting onto any website required a certain kind of education, nationality or payment… Worldwide, this openness is threatened, as there exist walled gardens, social media taxes and shutdowns.

Is the internet a level playing field yet for people from all backgrounds? This question has multiple sides to it: it is about how online communities fight harrassment and abuse, and about the working conditions of people who make internet hardware.

Do people understand the web well enough to make informed choices about things like sharing baby photos and recognising fake news? Do we understand it well enough to use it to people’s benefit, for example as a platform for activists to collaborate on?

Should the web be controlled by few or many? In other words, should power lie with a couple of companies that everything centers around, or do we want the web to be more decentralised? The Internet Health Report 2019 contains lots of good arguments for decentralisation.

I learned a lot from reading the Internet Health Report 2019, from great new initiatives to serious problems that I wasn’t aware of. As a reader of this blog, I invite you to dive in yourself, too!

This is not a sponsored post, I am not affiliated with the Mozilla Foundation, just excited about their work.