Mom-jokes as part of corporate culture

Dutch retail giant Coolblue showed the world this week that they have a new meeting room, named ‘Your Mom’. They explained in a blog post how this name sets the stage for all sorts of mom-jokes. I think this is not really OK. 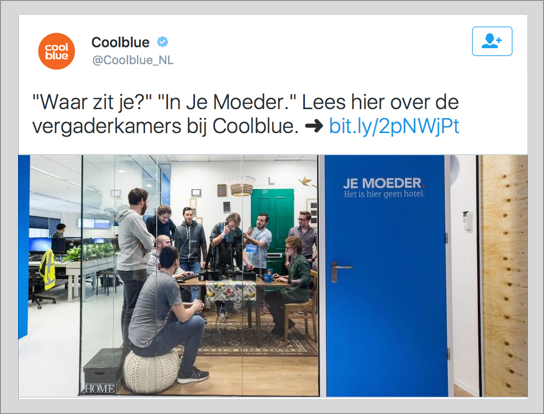 Before I continue: I am just commenting as a member of the tech community on a situation in a company that does a lot of recruitment in the tech community. Why do I do this as I don’t even work there? What’s my business here? In all modesty, I am just a developer that would like the tech community to be inclusive. I am trying to figure out which things get in the way of this (and how).

The problem, I think, is not with jokes or even inappropriate jokes. Fun is fine! Have fun at work. Banter. As a person, between you and other people. Cross the line, or choose not to. Be as politically correct as you like, I guess. Be childish if you like. Your jokes reflect on your person, they get you in trouble (or don’t). Person-to-person gives context for judging whether lines are being crossed. Unless you are in higher management, on a stage, in public: your jokes likely don’t harm that much.

If you are a company (or manage/represent one), this is different. Companies should be wary of jokes that have sexual aspects in them, because their language creates a corporate culture. You can see this in the example: they’ve painted a mom joke onto a meeting room, their corporate blog explains why this is funny. It has gone from a joke between people who work there, to a joke that is part of the company’s culture.

What’s wrong with a mom-jokes culture

In terms of recruitment, you will likely change the set of people you can pick from. Maybe you will get to pick from more people who like mom-jokes (and, sure, they could be excellent at their work), but you will likely also miss out on people who see them as a red flag. Especially in tech, and especially in the light of recent scandals. You will end up with a less diverse company. Diversity is a good thing (there’s loads written about this elsewhere; the recent film Hidden Figures illustrates how diversity got NASA into space).

A mom-jokes culture can make the environment less welcoming and possibly less safe for your employees. If you have an issue you’d like to report to HR, let’s say with regards to something horrible like harassment, can you still be sure it is going to be taken seriously? The HR department being part of the management of a company that has mom-jokes in its corporate culture seriously changes this. If one colleague made an inappropriate comment, you can report to the company. If the company itself makes inappropriate comments part of its DNA, where can you go?

For the tech industry

This is the one where my worries are probably most appropriate, as I don’t recruit or work for the company, but I do work in tech: a tech giant with a mom-joke culture makes the tech industry look less professional. It makes the tech industry look less attractive to a diverse group of people. Like I said above, diversity is a good thing. The industry should be cautious not to miss out.

I have nothing against jokes, but as an industry I think we owe it to ourselves to make sure that inappropriate jokes don’t become part of company cultures, as this can harm those companies as well as the tech industry as a whole.

Mom-jokes get in the way of diversity, by attracting people who like such jokes, and repelling those who don’t. This isn’t necessary. There is so much fun to be had in the world without such side effects, we really can do better!