This week I read The age of surveillance capitalism by Shoshana Zuboff, an enlightening book about how big tech companies are watching what we do, and what their end game might be. I thought I had heard all of this, but, of course, I couldn’t be more wrong.

Beyond “You are the product”

You’ve likely heard people say ‘if a product is free to use, you are not the customer, you are the product’. It’s a bit of a cliché now, that Zuboff completely reframes in The Age of Surveillance Capitalism. We aren’t exactly the product… we, or the data that describes our behaviour, to be more precise, are the raw material of a whole new iteration of capitalism. 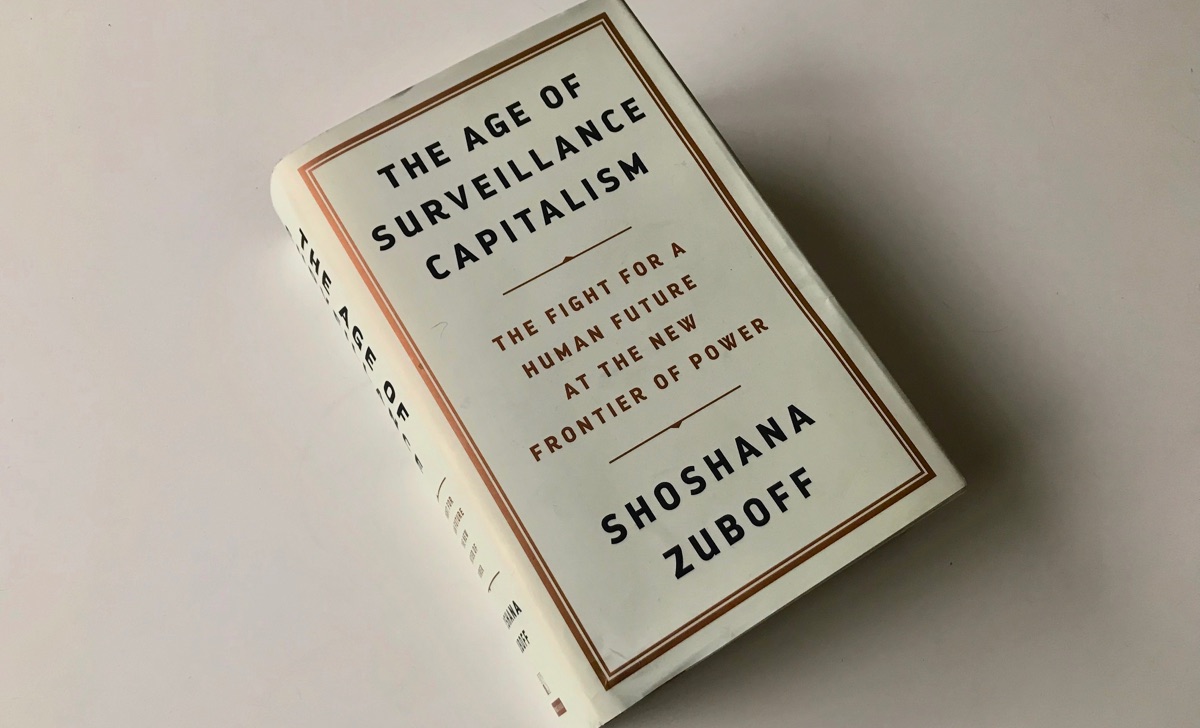 The book is huge, but only just over 500 pages, the rest is footnotes

The Age of Surveillance Capitalism explains this new iteration in the context of early capitalism (Ford’s, and even the age of gilds). Zuboff explains how the founders of Google, and later Facebook and others too, set the scene: how they found use for data that previously looked useless, their secrecy about exposing the size of their data collection and their lobby against rules. Yup, they prefer to make their own rules. And will insist that their way is the only way, which the world just needs to accept: Zuboff coins this ‘inevitabilism’.

This attitude of setting their own scene is a recurring theme throughout the book. For instance, when Facebook does behavioral research, they don’t follow “The Common Rule“, Zuboff explains, that academic experimenters apply to themselves to avoid power abuse. This abuse in a corporate setting could be much worse than that in an academic one, as there is more conflict of interest in play (in the corporate setting there is a need to earn profits for shareholders).

A new iteration of capitalism

So what’s this new iteration of capitalism? Zuboff explains that in this new paradigm, data is the raw source or ‘commodity’, extraction of it the production process (a supply route that the big tech companies work hard to protect) and predicting people’s behaviour is the product.

The production process (‘extracting’ data from people) has expanded massively over the past years, as tech corporations found new ways to get behavioural data (‘behavioural surplus’, as Zuboff calls it). They offer more and more services, sometimes increasing their speed by purchasing other companies (Facebook bought WhatsApp and Oculus, Google bought YouTube). And it isn’t just online either. Tech companies discovered there is lots of data to be gathered in the real world, through physical things with internet connections. Google Maps cars that ‘accidentally’ take WiFi hotspot data. Hotel rooms that come with Alexa built-in. And sometimes they give rewards in exchange, like an insurance company that offers a lower rate in return for replacing a monitoring device in your car.

There is this notion in the book that we accept too much without foreseeing the full picture. At some point Zuboff describes the nature of contracts online: legally they likely cover all they need to do, but might it be unreasonable to assume that anyone ever reads them? What if they refer to other contracts? The large scale data extraction operetion, that Zuboff later calls Big Other, may be a case of the horseless car syndrome, she suggests. When the first car was invented, we were used to horses and carriages, and thus that was how we tried to name and understand this new phenomenon: as a horseless carriage.

The dystopia of a data-driven society

The latest big thing isn’t just studying behavior, it is influencing behavior, too. Experimenters at Facebook found they could hugely influence people in whether they would go vote or not by using techniques from behavioral psychology. With these techniques, humans become merely tools. Zuboff introduces the notion of instrumentarialism, which she compares do and notes is quite different from totalitarianism. They both overwhelm society and do some sort of social domination, but for different reasons, the market vs the political realm.

Zuboff shows how the world in which surveillance capitalism plays the role it plays in ours, is somewhat dystopian. She compares it to Orwell’s and Skinner’s. One of the aspects that makes it dismal is that humanity gets reduced away. The tech leaders are utopians and believe in a “data-driven society”, Zuboff says. They insist that that is ’practical and feasible but also a moral imperative in which the benefits to the collective outweigh all other considerations’ (438). People like Pentland don’t believe in individuals with opinions and attitudes to live… if we see others do something, we’ll copy, we are easily conditioned.

Is this a conspiracy theory?

I have to ask, as last week a group of Dutch actors accused of hyperbolic complot theories held up the book in a talkshow as their bible. It contains some strong claims and assumptions about people’s intentions, but overall Zuboff’s book is very thorough. Her claims and statements are consistently supported by extensive footnotes.

A lot of the practices she asks questions about, actually happen. Tech leaders don’t deny them, and sometimes even boast about them, Zuboff shows. This is in the realm of private companies. What if the instruments of these private companies get used by authoritarian governments? Zuboff talks about how private companies helped American intelligence agencies with all sorts of technology. China’s Sesame Credit systems rates people’s character and gives or denies them perks, including things like purchasing rail tickets and using dating apps. The numbers are staggering. Again, these are not conspiracies, they actually happen.

It is also important that this argument isn’t against capitalism, it is against systems that break basic principles of democracy and human autonomy.

The age of surveillance capitalism is a great read, be sure to get a copy if you want to understand what surveillance capitalism is and could become. It does a great job at demonstrating what she presumes are the dynamics behind the internet economy. It’s convincing, and thought-provoking. It has gotten me worries, but also strangely positive about which world I want to fight for. It’s not an easy or quick read, as it is an academic book and sentences tend to get long and detailed. Alternatively, you can hear Shoshana Zuboff talk about surveillance capitalism at The Intercept or her interview with Mozilla’s IRL podcast.