The year is about to end, so here is another year in review post!

Some might think it is odd to summarise one’s own year, but I think it is fun to share some facts and thoughts. I love reading these kinds of posts from others (hi Zell, Andy, Chee-Aun, Nienke, Heydon). So here we go. Like last year, I’ve divided stuff into highlights and things I learned. To be clear, that doesn’t mean I had a year consisting of 100% highlights and learnings. That would be weird. Of course there was also stuff that went wrong, wasn’t amazing or was personal. I just think they’re for elsewhere (in person over drinks).

In 2018, I spent most of my time in Mozilla’s Open Innovation team, that I’ve been part of for over a year now (as a contractor). I feel very lucky to get to work with so many smart people. I’m specifically working on the IAM project. For those unfamiliar with the acronym: IAM is short for identity and access management, it is about how people prove who they are (for instance, with email or a third party) and get access to stuff with as little friction as possible. That is particularly challenging when people have multiple identities, which most do. As part of the IAM effort, it’s been super exciting to build most of the front-end for a project codenamed “DinoPark”, which is currently in closed beta. I’m excited to continue this work in 2019 and share more when we can.

In Q4, I also spent a day a week working at the City of The Hague, specifically helping with improving accessibility and profesionalising front-end development of their digital services. It’s been great to see improvements shipped both in the application’s code as well as the content management system product. Looking forward to what we’ll do next year.

I did not do a lot of volunteering this year, but I did translate the Inclusive Design Principles into Dutch and worked on improving MDN documentation on accessibility.

This year, I traveled to Munich, Bristol, Munich (twice), Taipei, San Francisco, Mountain View, Paris, Como, London (twice), Berlin (twice), and Düsseldorf. I’m not so proud of this carbon footprint, and experimented with European train travel, which took a bit more time, but was pretty ok for productivity.

This year, I attended these events: 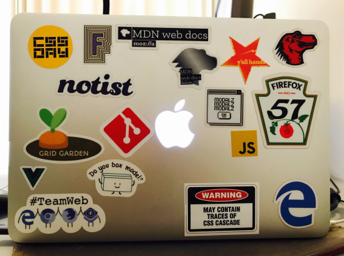 I spoke multiple times, too:

I did my CSS Layout workshop three more times (for Fronteers and at Front-end United) and ran a new accessible components workshop (for Frozen Rockets).

Organisers, thanks so much for having me, a newbie speaker. The first time conference speaking was stressful, time-consuming and very scary, but also satisfying. I got great feedback, both praise (yay!) and things I can improve on (thanks, you know who you are).

I’d love to speak more in 2019, please do get in touch if you want to have me present at your event or give a workshop.

I published 26 posts on this blog, not including this one. Like I said in last year’s review: I very much recommend writing to fellow people who work on the web, it can be helpful in many ways. It is also great to be able to do this on a domain you own, on pages you designed and built. If anyone needs mentoring around this, get in touch, I would love to help!

Some of the most read posts:

It felt a bit weird to have the Goodreads app keep me in check reading-wise, but it did the job. I managed to read more than the goal I set: 46 books. Some that readers of this blog might find interesting:

For all the ‘big data’ and AI expertise that Amazon, which owns Goodreads, has, the app is still very bad at recommending new books. For me, it doesn’t go beyond what the most generic airport bookshops stock. The real human beings I follow on the platform brought much more reading inspiration.

Some random things I learned:

What I want to get better at next year:

With that, I wish all readers a fantastic 2019! If anyone has written year in review posts, I’d love to hear about them in the comments/webmentions, and read what you have done.

wrote on 27 December 2018:
great overview hidde! v interesting to see all the things uve done. 2Thoughtz: "The real human beings I have befriended..." sounds like "My girlfriend who lives in Canada and is definitely not made up..." :p and nit pick: FF nightly isn't a beta channel. That's a separate version
Andy Bell wrote on 31 December 2018:
Ah yes, I very much enjoyed this one. Personal ones are good!